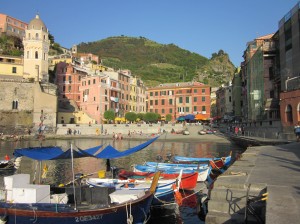 Since no autos are allowed into Cinque Terre, one has to park the car on the outskirts of the towns and take either the train or ferry in.   We opted to park in Levanto, because rumor had it that the parking and transportation were easy, which they were.  The only minor glitch… there as a strike by the railway workers, and the ferries weren’t running until evening.  As the nice man in the parking lot told us, you no get there… im-poss-i-ble.  I was just not having that.  On the phone I went to call the hotel and managed to get the name of a street outside of Vernazza (the town where we were going) and plugged it into the GPS.  Off we went.  I’ll let Dennis comment on the rest of that trip.

DENNIS: Big day for me.  Had to have surgery to have my heart removed from mouth after Myra flew along the winding mountain road into Vernazza.  The road gives new meaning to the expression “hairpin curves”.
One has to take a bus the final kilometer into the town since the only cars allowed in Cinque Terre are the twisted metal wrecks at the bottom of the steep ravines.  And then…one walks.
We found our quaint little hotel and began the long process of dragging our bags up to our room.  It’s rumored that Sir Edmund Hillary trained for the Everest expedition by staying in Vernazza for three weeks.  The reason that the hotel has a minimum stay of two days is that you could never get to your room and back in less time.
It seems that the Italians are quite environmentally conscientious.  While I can’t say for sure that the narrow beds were recycled coffins, it was the first time I had ever slept in a bed with a lid on it.  Despite that, they’re quite comfy.  In-room entertainment was a 12 inch digital TV with one channel that featured live coverage of the annual accordion competition from Bucharest.
Despite all this, the place is wonderful.  We got back down into the town square, having left our oxygen masks at the front desk, and headed to the restaurant that faced the lovely harbor and beach.  When our waiter, Ainesse, told us he was from Morocco I immediately mentioned the Moroccan Olympic champion and 1500 meter world record holder, Hicham El Guerrouj.  Ainesse positively beamed!  From that point on we could do no wrong.  Three rounds of drinks later he said he was giving us a discount on our beverages (which brought the total down to an amount equal to the national debt of Lichtenstein) and he reserved us a lovely table for dinner.  After a leisurely stroll around town we arrived back at the restaurant in time to be seated next to a truly delightful couple from Louisville.  The food was fabulous (fish for me, veal for Myra), the drinks both numerous and ample and the company of our new friends, Jimmy and Mimi, proved to be a fitting finale to our first day in “the five lands”.

This entry was posted in Uncategorized. Bookmark the permalink.